With the UK blanketed in snow the week before it was a race against the melt to make it but here I was in Morocco. Armed with my Lonely Planet guide and some vague idea of doing a road trip from Fez to Marrakech, taking in the desert and mountains in between, I arrived having done very little forward planning. In fact, I had only booked a bed to sleep in a couple of nights before.

After arriving close to midnight, I lucked out and was able to share a cab with 3 other travellers from the airport to the Funky Fes hostel just on the edge of the medina. On arrival the hostel seemed a sociable place and I liked that. Some hostels these days can be a bit too big and impersonal but this one wasn’t in that category.

The next morning there was only one thing for it and that was to get walking and explore. The medina is a veritable maze of narrow alleyways, markets, souvenir sellers and small shops for everything that you could imagine. The Lonely Planet describes how ‘there is something intangibly raw about a place where 70,000 people still choose to live in the maelstrom of a medina so dark, dense and dilapidated that it remains the world’s largest car-free urban area’. This I thought captured it perfectly.

For the first 15 minutes I felt pleased that I was managing to navigate myself around but soon, and all too predictably, I got lost. Not that it really mattered; getting lost is all part of the fun as a visitor. I was mainly just up for exploring the place and experiencing a vibe so culturally different from what I am used to. The only things I was vaguely on the look out for were a fridge magnet and some Moroccan music to potentially influence future musical compositions (neither of which I ended up buying).

After a good walk around for a couple of hours I reached the Bar Bou Jeloud area by which time I was ready for a sit down and some food. I was accosted by various cafes who wanted my business and I ended up at a rooftop spot for lunch where I sampled one of the local specialities – chicken tagine (it was to be the first of many on the holiday!). The views of the city from the rooftop were great.

To get a contrast with the old medina I then strolled down to the nicely chilled out Bou Jeloud Gardens (picture below) where I hung out for a while before continuing my walk down to the Ville Nouvelle (new town), passing en route the Royal Palace. I then had another cafe stop and took in the first half of Atletico Madrid v Barcelona in a bar, witnessing the great Lionel Messi score his 600th career goal!

I returned in the direction that I had come from but taking a detour through the less touristy Jewish district. There I ran into a man called Jacob who was offering to show me the way to the synagogue. I knew from my guidebook that the Ibn Danan Synagogue was in this part of town and I thought that this was what he was going to give me directions to. As it turned out I was falling into the trap of him giving me a guided tour of his neighbourhood and me paying for the privilege. Jacob, or at least this is what he told me, had previously starred on a French TV2 programme about the Fez Jewish community’s work to restore the medina (I haven’t yet managed to locate said documentary!).

The first stop was a random woman’s house where I went up to the roof to take the above picture of the Jewish cemetery. We then proceeded to walk deeper into the neighbourhood where he showed me the outside of a property he was restoring.

After a while, and when I was deep in the neighbourhood and wouldn’t have been able to navigate my way out in a hurry, he asked for a 200 dirham (20 Euros) donation towards the community’s restoration work. So I paid him. And then he asked for another 100 dirham for his guiding, which again I felt obliged to pay. With the money exchanged returning me to the main through fare seemed less of a priority.

Perhaps I am being cynical but it felt like a scam, albeit mild fry compared to some of the stuff I’ve fallen for in the past (thinking particularly India here!). But what can you do, as you want to interact and go with the flow. I had got to see an area of the city I wouldn’t otherwise have seen and if the money I gave does go to restoration work then great.

I walked back to the medina passing again through Bou Jeloud Square (picture above). Soon, the blue skies disappeared to be replaced by dark storm clouds and I could hear thunder in the distance. By the time the storm broke I was undercover in the medina and able to take shelter. The rain was heavy with torrents of water flowing downwards through the bowels of the medina. I waited for the storm to the pass which fortunately it did quite quickly. 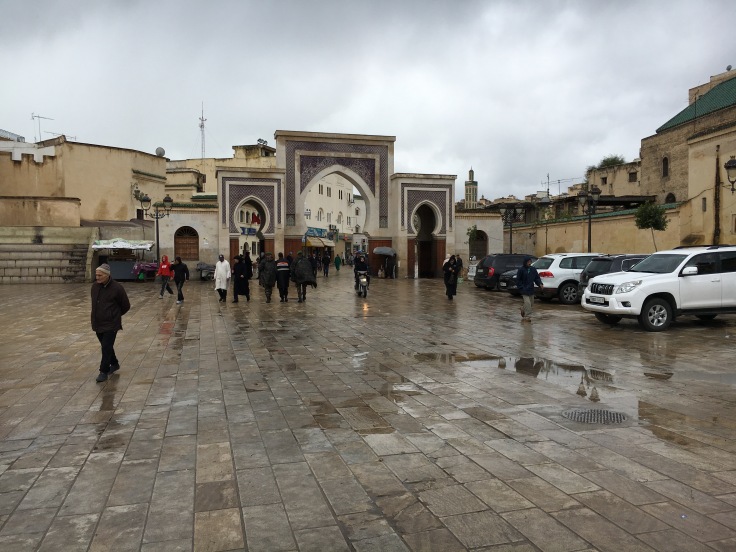 By now I was tired of walking (and getting lost!) and was pleased to navigate my way out to the east side of the medina and to the main road. From there I could easily find my way back to the hostel, where I hung out for the evening socialising with fellow travellers.