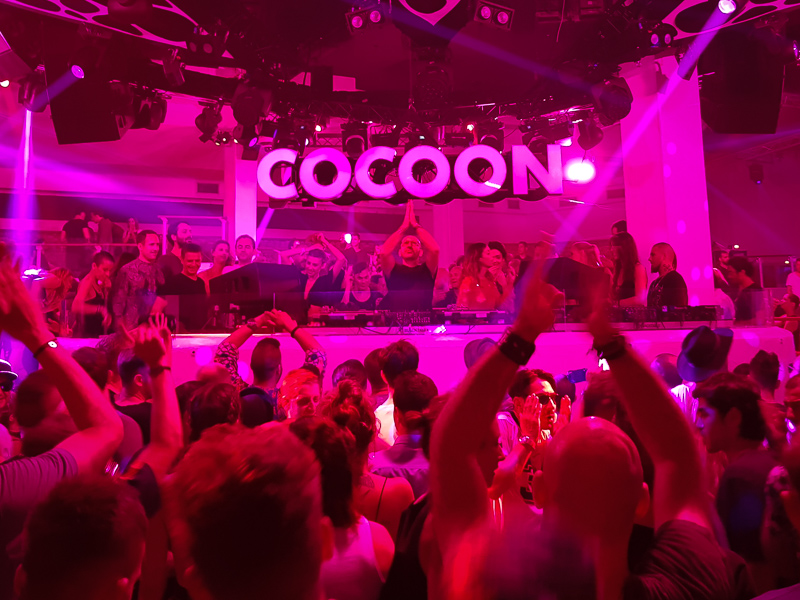 When Sven Väth’s Cocoon party first came to Monday nights at Amnesia, Ibiza in 1999 the clubbing landscape on the island was very different to what it is now with house and trance dominant and no-one really pushing techno. Cocoon changed all that bringing techno sounds to the fore and spawning many other nights in the process, as various DJs who owed their first big break on the island to Sven subsequently branched out to create their own nights, the most prominent example being Marco Carola with his Friday night Music On party at Amnesia.

I first went to Cocoon at Amnesia way back in 2005. The party was in its 7th season and already an Ibiza institution. The club was different back then in terms of the position of the DJ booth on the Terrace and for me it was all about Sven in the smaller (but still huge by most standards) club room. A standout memory was deep into the night him mixing from Mathew Jonson – ‘Marionette’ into Underworld – ‘Dark and Long’. These were big records but not ones I had particularly expected to hear there and yet they hit the spot perfectly. One of the great things about Sven was he always had an ear for the big tune positioned perfectly in the journey that is one of his DJ sets. At that night back in 2005 my love affair with Cocoon was born and I have been back countless times since to what has become my favourite party on the island. The night has provided many great memories down the years and its location at the massive hedonistic space that is Amnesia was a big part of that. Check out this video from last year where Sven and Richie Hawtin reminisce about those times:

Fast forward to spring 2018, however, and the momentous announcement was made that the 2017 season at Amnesia had been Cocoon’s last at the club and that after 19 seasons the night would be moving to Pacha for 2018. Not only that, but the party would now be on a Wednesday and no longer the Monday. This marked a big change and the question on everyone’s lips was how could Cocoon even begin to be the same in Pacha? The vibe in Amnesia is very different; for starters it is bigger and to me feels more hedonistic somehow. The perception was that Pacha as a setting just isn’t that conducive to techno music, this being shaped by the fact the majority of nights at the club typically purveyed a sexier, housier sound. In short, it was perceived as a bit too glam and not ‘underground’ enough for a techno night.

So what was going on here? On closer inspection perhaps the move was not such a surprise given Cocoon’s hook up with the Pacha brand elsewhere, for example at Pacha in Barcelona. And given comments Sven himself had made in a recent interview with Mixmag, it was apparent that in recent years all had not quite been as it seemed in terms of Cocoon’s relationship with Amnesia. Perhaps a move to Pacha would freshen things up and constitute a new chapter in Cocoon’s history, furthering its longevity.

Nevertheless, the move certainly felt like a risk. In the fickle world that is the dance music scene, would clubbers retain loyalty to the Cocoon brand or would there be a desertion of the fanbase with techno heads giving preference to other parties at Amnesia such as Music On or Cocoon’s Monday night replacement Pyramid (whose first move interestingly had been to book Cocoon stalwart and Amnesia Terrace legend Ricardo Villalobos to play its opening party the following Monday)? Also, was Sven going to play differently in the new venue, pushing more of a deeper sound perhaps?

So many questions but with it being 30 May and the Cocoon Pacha Grand Opening now upon us the time for speculation had ended and it was the moment to check out the party for myself. I had high hopes for the night; Sven after all is one of my favourite DJs on the planet. And having been to the Solomun + 1 opening party the Sunday before I had sampled the new Pacha layout first hand and thought the re-design of the club complete with bigger dancefloor would work well for Cocoon (although interestingly Sven had revealed he committed to the move before knowing about the re-design).

I arrived at the club just before 3am, having been waylaid in Ibiza Town consuming a couple of mojitos, a glass of champagne and a few too many shots in Geminis Bar, my port-side drinking establishment of choice. You really can’t beat sitting outside by the port watching the world go by, chilling in preparation for the night’s clubbing ahead. This did, though, mean that I managed to miss the entirety of Kristian from Ame’s warm-up set – poor form I know given I was going to be writing this review piece and a shame as he is always consistently good as a DJ. That said, for me tonight was all about Sven and how he would take to his new surroundings of Pacha.

Shortly after arriving at the club my partner in crime for the night Tom and I took up position on the dancefloor from where we didn’t stray for the rest of the night. The crowd was good and you sensed that everyone that was there wanted to be there and had a real passion for the music. There was more space to dance than at Solomun + 1 the previous Sunday and that was definitely a positive. Sven was clearly enjoying himself behind the decks from the off. An hour in he dropped one of his current faves, the massive ‘ANNA – Hidden Beauties’ on Kompakt, before moving into deeper, more melodic territory …

… and then back to groovy techno, taking the crowd on a journey through his electronic palette.

A particular mid-set highlight was him dropping ‘Tim Green – They Want Us To Fall Down’, one of the standout tracks from Tim’s recent album on Sven’s Cocoon Recordings label.

Sven by now was totally in his element as he picked up the pace. Was this Sven playing differently because he was in Pacha? Not to my ears. He was just doing his thing, consistent with what you would expect from a Sven Väth set. There were plenty of big melodic moments but this was something I had come to expect from Sven’s sets during the Amnesia days, where for me it had always been about much more than just pounding techno. In short, it felt like a Cocoon night and Sven was as uncompromising as ever. In fact, I’d go as far as to say it felt like no other night I’d previously been to in Pacha.

The new Pacha layout definitely helped with the vibe in terms of Sven’s connectivity with the audience and just made perfect sense. I am talking here about the new permanent position of the DJ booth which is right in front of you as you enter the main room; it is in the centre of the club and at a level close to the dancefloor, no longer tucked away in a corner. There is also now more depth to the dancefloor with it reaching further back and the steps down to it less imposing and steep. And yet for a super club there was an intimacy that you just wouldn’t get in Amnesia. Added to that, as always the Pacha sound system was bang on. 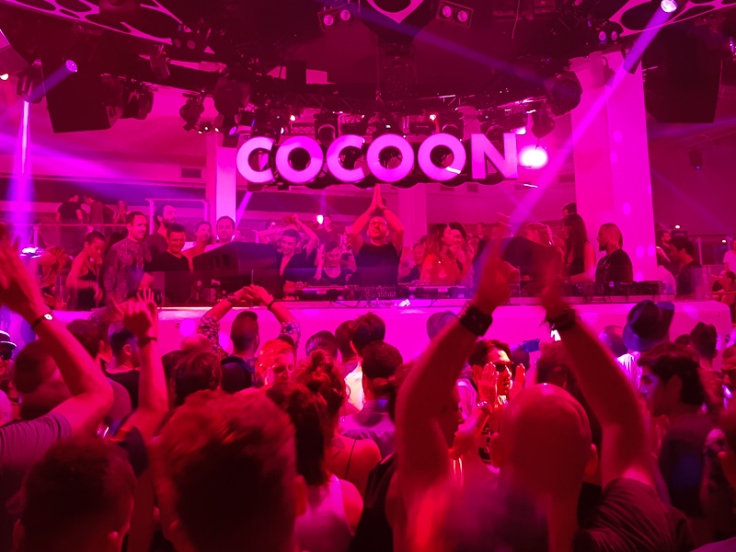 In the interests of balance I should point out that the new layout may not necessarily be to everyone’s tastes, at least on the first time of experiencing. I had had this very debate with Tom after the Solomun + 1 opening. He described how for him Pacha was like a party in a big Spanish mansion, the ultimate hacienda, whereas the refurb made it feel much more like any other club with something being lost in the process. Of course, the fact that this is the first refurb the club has had in 50 years will make it feel different even though I think the designers have tried to stay true to its Spanish architectural roots. Tom did, though, seem to be warming to it after Cocoon and even stated it was one of the top 5 nights he’d ever had at the club (and the other four all sounded like belters!).

Back to the night as it was unfolding, as the clock passed 6am Sven dropped what for me was one of the tracks of the night in the form of Butch’s remix of ‘Gregor Tresher – Neon’. Sven was now winding himself up for the big finale as we approached the business end of the night. As the clock struck 6.30am the pummelling techno sounds of Desert Races from Luke Slater’s Planetary Assault Systems alias came thundering out of the speakers and I thought to myself how Sven was the only DJ that would play a track as hard as that in Pacha. But soon the beats were to relent and total melodic bliss ensued with a largely downtempo, ambient and broken beat finale to end the night. Here’s the start of it as the breakbeat of A Sagittarian – ‘Vanishing Point’ comes into the mix.

… with this then followed by the epic sounds of the Brian Thrash Remix of Jared Wilson – ‘Ghost Miners’. I was waiting for the beat to drop back in, but it never did!

Then came the amazing talent that is Ricardo Tobar, with his sonically epic guitar-laden track ‘La Condamine’.

There was, though, to be one final twist as the crowd begged Papa Sven for one more tune to end the night. And what a reaction he got as he then proceeded to drop ‘Pick Up’ by DJ Koze, the massive filter disco anthem from Koze’s new album. The 12″ Extended Disco Version seemed to go on forever as he toyed with a crowd in the palm of his hand after the four hour ride. Sven was having fun dropping the bass in and out and miming the song’s ‘wants to be the first to say goodbye’ lyric, whilst blowing kisses, waving to the crowd and holding one of his many vinyls aloft.

‘Pick Up’ will surely go on to be one of the biggest tracks of the summer in Ibiza. Whilst it didn’t fit at all with the rest of his set it was a great track to finish on, ensuring a feel good factor to end the night and rounding off what had been a great opening party at Pacha that would surely set the tone for the rest of the season. Whilst I’d been sceptical beforehand about the move to Pacha, the night had hands down been a great success as Cocoon entered a new chapter on the island.