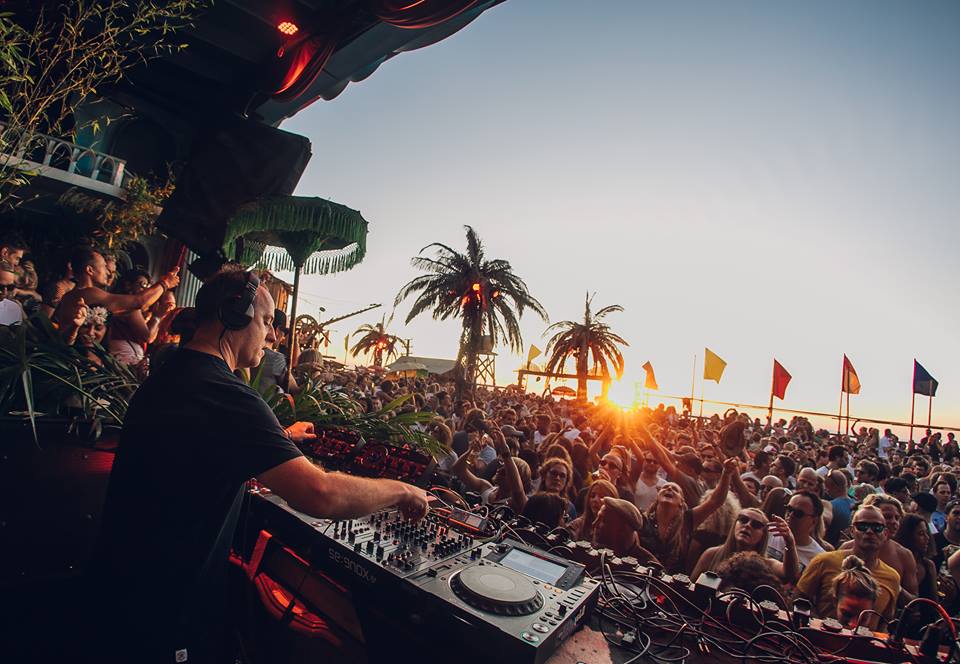 Situated around 25km due west of Amsterdam at Bloemendaal beach, Woodstock ’69 is a legendary summer party spot. I had a lot of fun there last year seeing Hernan Cattaneo and Pole Folder but the weather had not been so great. Needless to say I was keen to come back and experience the place in sunnier times! 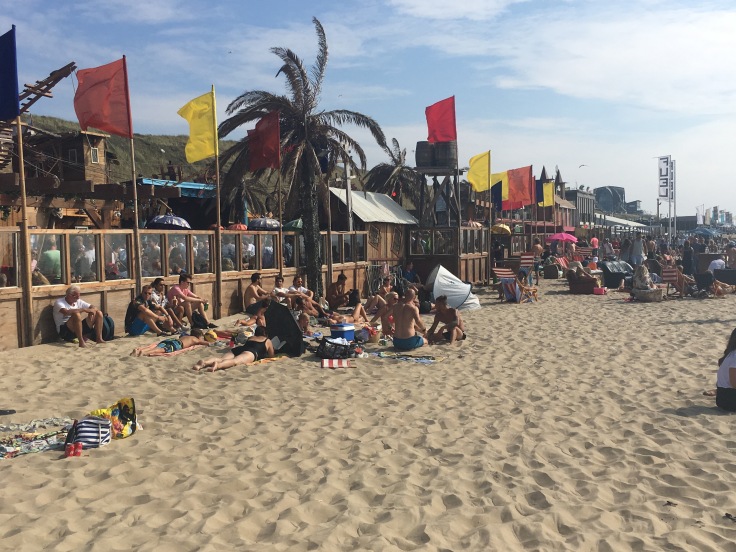 Efforts to get a Hernan Cattaneo ticket for this year had not come to fruition. His Woodstock ’69 gigs are a thing of legend in these parts with tickets like gold dust. In fact, they had sold out within hours of going on sale and that was with two gigs on back to back days. Not wanting to miss out totally this year I scoured the listings for other good parties happening at the venue over the summer. It was then that I saw Eelke Kleijn would be throwing a party on Sunday 22 July under his DAYS like NIGHTS label moniker. That was great in itself but not only that, Sasha would be headlining. This was too good an opportunity to miss and presented the perfect excuse for a weekend away during the height of summer to one of my favourite European party spots, just a short hop across the water from the UK. My friends Brendan, Si and Mark thought the same so away we came!

We would be staying Friday to Monday in Haarlem, a city just 10 minutes away from Amsterdam Central by train and easily accessible from Schiphol Airport for the journey in. The advantage of staying in Haarlem is the coast at Bloemendaal is a short 7.5km bike ride away. And it is an amazingly chilled place in its own right in which to spend some time. In fact, we didn’t feel the need to venture into Amsterdam the whole trip. The Niu Dairy hotel where we were staying had only been open a couple of months and was a modern, funky place, very central, and with a cool locals bar close by on the opposite side of the canal.

On the Saturday we got a bicycle rental for 48 hours which enabled us to potter about at leisure the day before the gig, checking out a number of choice watering holes. I love cycling – having grown up in Cambridge cycling around the city was a way of life but in London it can be quite hazardous. You don’t get such problems in the Netherlands and the way everything is set up for cycling, and how this is embraced, is one of the things I love the most about the place. Cycling to Bloemendaal was straightforward with a bicycle lane all the way. I had, though, worked up a sweat on arrival! 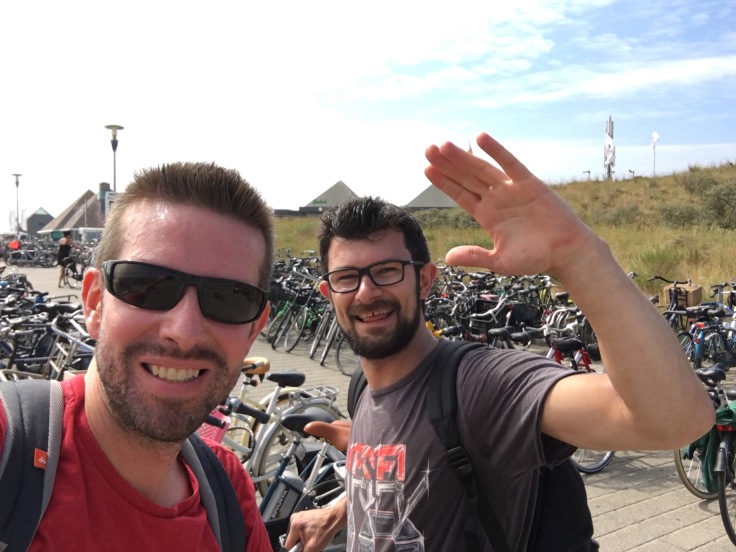 We entered early at around 3.30pm. Eelke Kleijn was playing a 6 hour back to back set with Miss Melera and we wanted to take in as much of this as possible. There were already a decent number of people at the venue who like us were keen to take advantage of the stunning weather. We lapped up the warm-up vibes, sipping beers and mojitos in the sun as the set gradually built.

It was particularly nice to hear some older Eelke Kleijn tracks such as ‘Lovely Sweet Divine’ get played out. I have followed Eelke Kleijn’s career for a long time having first discovered him way back in 2007 via his ‘8 Bit Era’ track on Nick Warren’s Global Underground Paris album. Since then he’s risen through the ranks to become one of progressive house’s biggest artists. I use the genre badge somewhat loosely as his sound has evolved over the years and much of his success has come from pushing a sound more at the housey end of the progressive spectrum. But he has done this in a way that has always stayed true to his roots. In short, he’s a massive talent, extremely hardworking and one of the nicest guys on the scene. This would be the first time I had properly seen him DJ having only caught the tail end of his set at last October’s ADE Lost & Found Party.

It is always great to see DJs play for a good length of time and slowly build a set as opposed to playing wall to wall peak time bangers for just a short time. The fact Eelke and Miss Melera were playing B2B arguably made things even more interesting in terms of the breadth of music being served up, with each pushing the other forward in interesting directions. You can catch a flavour of the first half of the set here:

It was a proper B2B with for the most part it being 2 tracks on, 2 tracks off. Whilst they have differing styles, Melera playing the more drawn out proggy tracks of the two, they were complementing each other well. They were also clearly having a lot of fun behind the decks, as mates do, as the pair go back a long way on the Dutch dance scene. That happiness certainly transmitted itself across to the crowd. And who wouldn’t be having a great time time playing to this crowd with that view from the DJ booth!

As the clock approached 6pm Eelke and Miss Melera were properly hitting their stride in the B2B and the last two and a half hours of their set would go down as my favourite segment of the night. I was absolutely loving the music by this point, with it ranging from more melodic proggy tracks such as Yotto – ‘Radiate’ to the housier sounds of Sebastien Leger – ‘Naive’. Here they are playing Dousk & Jorgio Kioris – ‘Ozaki 8’ (Dousk Remix):

This was followed up by the melodic tones DAVI’s remix of Hernan Cattaneo & Soundexile – ‘Astron’. Soon the music would take a housier turn once again and here’s Eelke mixing from Brigado Crew & Cristianno – ‘Voznja’ into one of the tracks of the party, Kaz James & Nick Morgan – ‘Twisted’:

Shortly afterwards we then got to hear Miss Melera drop ‘A Break In The Clouds’, the understated James Holden classic, before Eelke mixed into Analog Kitchen – ‘Nocturnal Entities’ from his own DAYS like NIGHTS label as old blended into new. For me, Eelke and Melera’s B2B set was the vibe of the party, both in terms of the quality of the music and the way it was programmed together with the energy building throughout and interest maintained through the diversity of the tracks. It felt like we had been on a proper journey together and it seemed strange to think that Sasha would shortly be coming on, what with the different sounds his arrival would represent.

At 8.30pm Sasha stepped up to the decks and took forward the baton with just over an hour and a half to go until sunset, and 2 and a half hours to the end of the night. It would be interesting to see what Sasha would serve up today. He’s someone I have seen a lot over the years and on his day can be amazing. Yet there have also been occasions where I have been left disappointed, not because he played badly but because he had set such a high bar for himself previously, leaving you expecting more somehow. I have seen less of him recently and so seeing him here today felt long overdue. 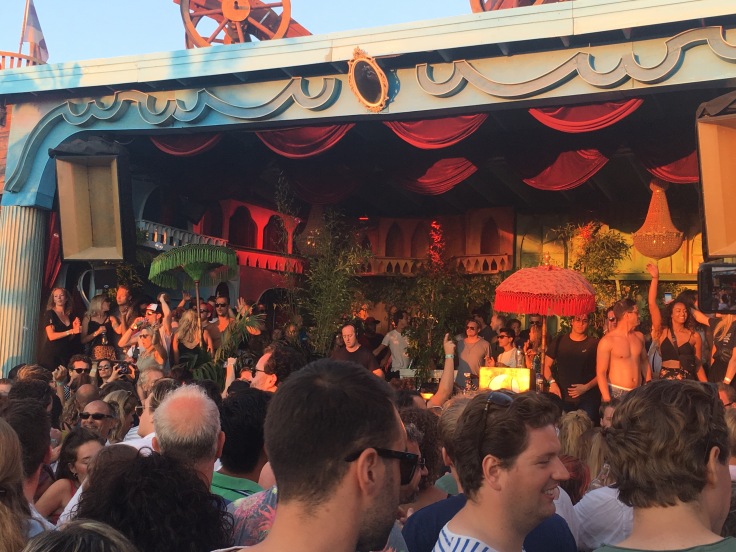 Sasha has been in the midst of a purple patch of late with an increasingly prolific studio output, his Refracted Live shows and the subtle class of his recent contribution to the Fabric mix series. By all accounts he had been on top form last month at the launch event for his Fabric mix when he played the club for 10 hours from opening until close. By comparison 2 and a half hours here today just didn’t seem long enough.

An hour or so in he dropped the new Gabriel Ananda single ‘Brummer’ (see video above). He played a few other melodic techno tracks in a not too dissimilar in style that were electro-ey and melodic with a nod to older trance sounds, one example being Rex The Dog – ‘Crasher’. Then as the sun inched ever closer to setting over the North Sea horizon the music got darker and proggier. Into the mix came the haunting minimal trance of Locked Groove – ‘From Beyond’, the sort of track you might think was a lost progressive classic but actually was only released in the last month.

From there Sasha mixed into ‘Trigonometry’, one of his biggest productions of recent years, to see in the sunset. What a sight that must be from the DJ booth, and it was certainly a special moment as the track entered the break.

With the sun finally now fully set beneath the ocean in front of him, he mixed into one of the biggest techno tracks of the summer, Butch’s ‘Countach’ on Cocoon, with this followed by KiNK – ‘Five’. By now there was only half an hour to go and it was finally dawning that all too soon the night would be drawing to a close.

Saving the best until last, Sasha ensured an epic finale as he closed in style with a signature transition from Sentre – ‘Do It’ into his own stunning Sasha Fabric2099 Mix of BAILE – ‘Amae’. What a way to end the night!

Eelke and Miss Melera then returned to the decks for an hour in the inside bar area as we psyched ourselves up for the bike ride home. All the DJs had been on point today with some awesome music and it was great to have experienced Bloemendaal as it is meant to be experienced – in the sunshine. What an amazing place. See you next year Woodstock ’69!