After three enjoyable nights in Chefchaouen it was time to move on. By this point I had two weeks still to go before flying back to the UK from Marrakech. I wanted to get down to Marrakech much sooner than that, though, and use it as a jumping off point to head out to the Atlas Mountains. But first I wanted to break up the journey somewhere. I discounted Fez as I had been there the previous year and I wanted to check out somewhere new. This would mean heading instead to the coast to either Casablanca (Morocco’s biggest city) or Rabat (the political and administrative capital). 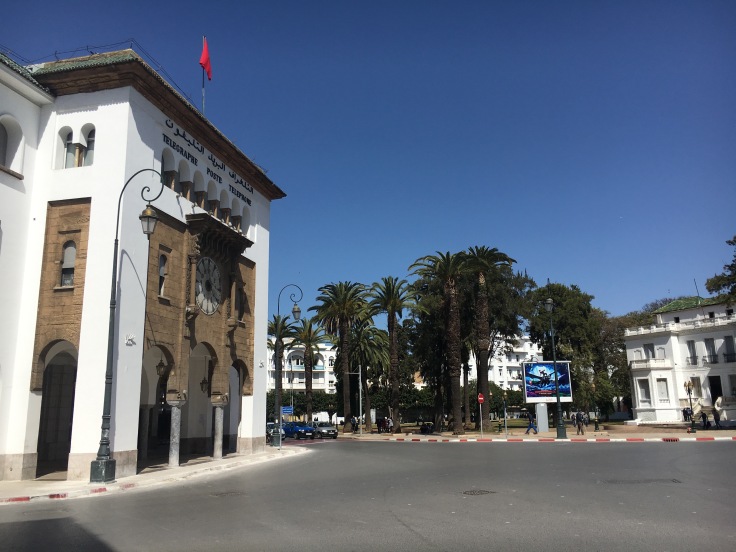 I was initially leaning towards Casablanca but no-one I met seemed to have anything particularly positive to say about it; in fact, not many had even been. With a population of 3.34m I guess it is just a big city and a representation of modern Morocco rather than a place to make a point of visiting as a tourist. The Hassan II Mosque, completed in 1993, is Casablanca’s big draw as it is thought to be the world’s third-largest after those in Mecca and Medina. But beyond that – perhaps with the exception of a tribute cafe to Casablanca the film! – the city doesn’t have so many attractions.

In the end I plumped for Rabat and if I am honest the main driver was the bus times. It seemed there was only one bus a day to Casablanca and it went at 7am. I just didn’t fancy it, especially as it was forecast to be warm in the morning in Chefchaouen – perfect for finally taking advantage of the hostel terrace (pictured above). It was also a shorter journey to Rabat – I was told 5 hours rather than 6. In making tracks around lunchtime I would be foregoing the chance to travel with CTM, the reliable national bus company. There was, though, another outfit called Nejme Chamal that operated the route and so I booked with them on the 1pm bus. 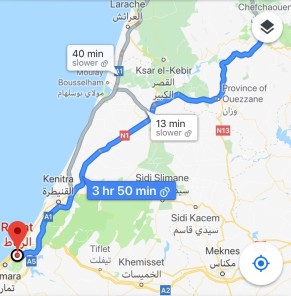 The bus was a proper magical mystery tour that took in seemingly every village on a zigzag route. Via the most direct route it is a 250km distance from Chefchaouen to Rabat but this journey would take 7 and a half long hours – not exactly the direct 5 hour bus I thought I had been sold – as it meandered its way down via Sidi Kacem. The irony was I hadn’t had a burning desire beforehand even to go to Rabat and had chosen it largely as the easy travel option.

About 5 hours in I had the excitement of a policeman boarding the bus at a checkpoint and searching – in fact, personally sniffing – my bag with it only being me singled out for this. I suppose the bus had been coming from Chefchaouen, the ‘marijuana capital’. But this didn’t take long and soon we were on our way again. As the bus inched its way nearer to Rabat it repeatedly crossed the main motorway rather than going on it and the closer we got to our destination the more frustrating the journey became. This reached a nadir when we arrived at Sale, a city that effectively is joined with Rabat, separated only by the Bou Regreg river. I could now see the toll bridge over the river and the centre of Rabat was just the other side, about a kilometre away. But did the bus go over that toll bridge? Of course not! We took the long way round, heading back inland into the countryside before entering Rabat from a southerly direction rather than from the north. The picture below that I took the next day, looking back to Sale, gives an idea of their proximity.

Myself and the handful of other travellers on the bus all had our map apps out trying to figure out what was going on. I overheard some concerned Germans ask a Moroccan guy where the bus was going, to which he responded Casablanca. Of course, he was joking but it seemed entirely plausible. It was bizarre that the bus station in another city was closer to where I needed to get to. It would have been quicker to get off in Sale (a couple of people did) and take another form of transport across like a tram or even a rowing boat. And this isn’t a joke – you can make out rowing boats crossing the river in the picture below. 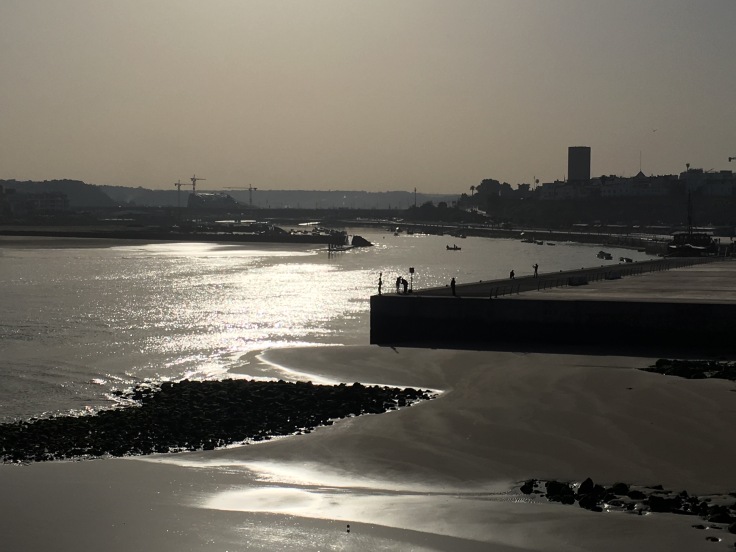 Whilst it was still light when we were in Sale, by the time we reached the out of town Rabat terminus it was dark – something I had been keen to avoid as I hadn’t booked anywhere to stay. We didn’t even get dropped inside the bus station, only on a road outside. At this point I approached a Japanese backpacker who like me was trying to get his bearings and we shared a taxi into town, metred at 40 dirham.

I got out at the main railway station hoping to use the facilities but they were out of order, nor was there any free wifi available. It was a bit schoolboy to have not booked anywhere but my earlier indecision about whether to go to Casablanca or Rabat extended to deciding on accommodation here. Rabat only has one hostel, the Medina Surfing Association, and whilst this would probably have been fine I was put off by the need to designate a specific arrival time if coming after 6pm (and it was now coming up to 9pm). There were, though, a couple of other hotel options listed in my guidebook that had potential and so I walked off in their direction through the new town towards the medina. As I got closer, looking ahead to the medina edge, I could see in the distance the word ‘hotel’ illuminated boldly in flashing red lights. This drew me in like a beacon and soon rising up before me was the ‘Hotel Du Centre’. Whilst not in my book and above my normal price range (around 250 dirham if I recall correctly) this was about as good as I was going to get at this point. It had been a long day! 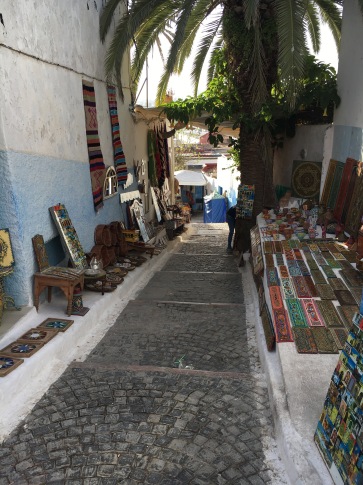 I got up early the following morning to see as much of Rabat as I could before the hotel checkout at midday. My main focus would be the Kasbah les Oudaias which is just beyond the medina and by the mouth of the river. I largely had the streets to myself at this point and in stark contrast with Tangier didn’t receive any hassle. 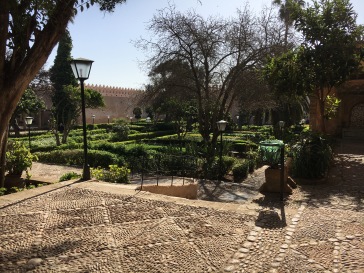 Soon I was at my first port of call, the Andalusian Gardens. I then continued on, taking in views of the Kasbah walls rising dramatically above the river. 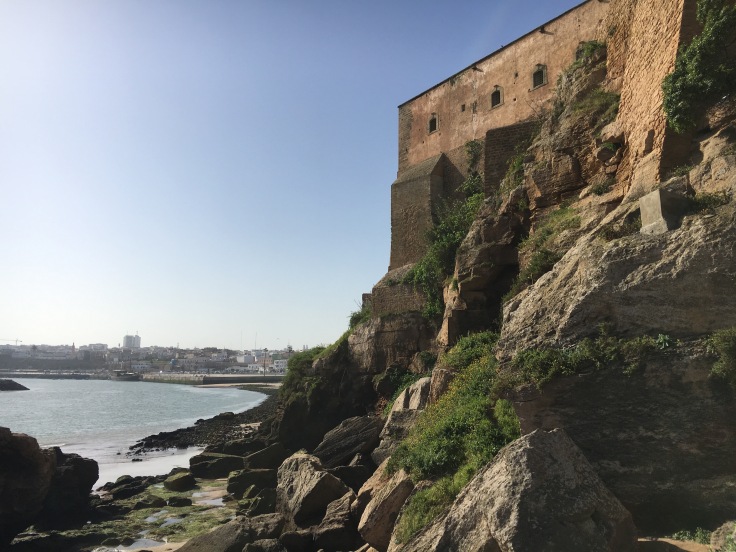 The Plateforme du Semaphore afforded some great views across to Sale and one of my favourite pics that I took around there was of a Moroccan surf school counterposed against the wall of the Kasbah. 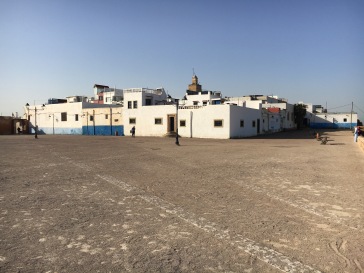 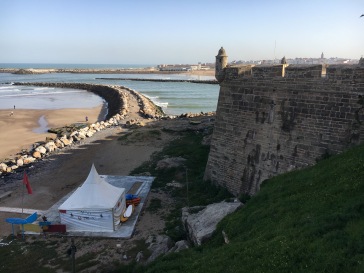 There was time to take in a temporary art exhibition by the Bab Oudaia, the Kasbah’s main gate, before I took a leisurely stroll back through the streets of the medina to the hotel. 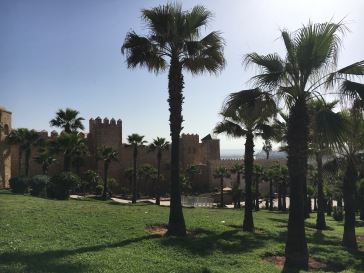 I took a few shots of people going about their daily business in the medina and they captured the relative tranquility of this Sunday morning. It was certainly much busier the night before when I ventured out briefly from the hotel for dinner. Many would say that as a medina it is lacking when compared to Marrakech and Fez. It is true that it is much smaller and you don’t get that level of craziness that lends Marrakech much of its appeal. Nevertheless, I found it perfectly pleasant for strolling around. 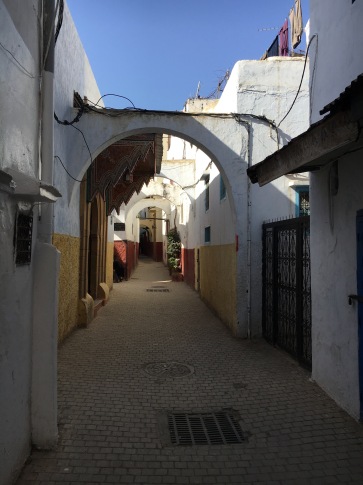 After checking out of the hotel I went to the new town that I had walked quickly through head down the night before. The pleasantness of Rabat centre was even more in evidence here. With its grand buildings, wide avenues and prevalence of coffee bars it felt more European in nature and less like the Morocco I had become accustomed to. I settled down in one such cafe to read and take in some sun, enduring the musical accompaniment of an instrumental version of Celine Dion – ‘My Heart Will Go On’ seemingly stuck on loop. 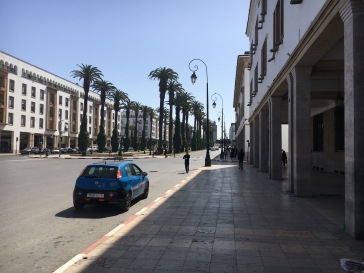 In the afternoon I then took the train to Marrakech which was a much smoother way in which to travel. Three and 3/4 hours by train is greatly preferable to a 7.5 hour bus journey that should only take 5. On arrival in Marrakech I haggled the taxi drivers down from 90 dirham to 40, walking away from the first and then refusing to pay 50 to the second. I then located the hostel I stayed in last year without any problems, making it just in time for a great rooftop sunset.